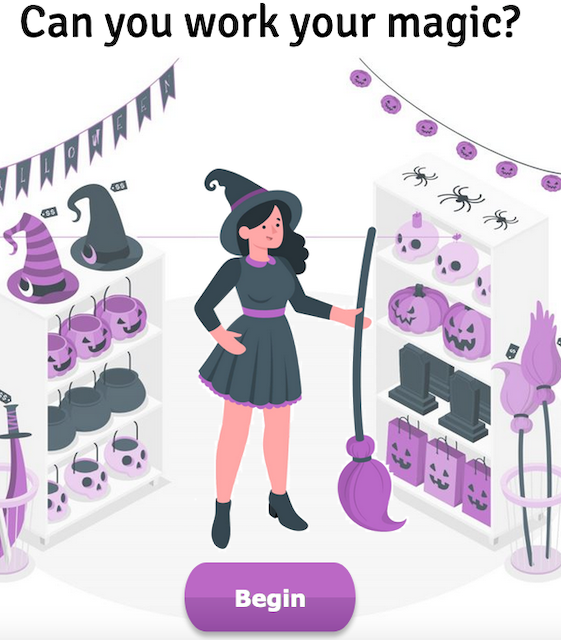 This playful branched scenario uses gamification elements and a fresh color scheme to create an engaging learning experience that is appealing to millennials and perfect for customer-service training.

I created this piece to enter a portfolio competition hosted by the   Your Instructional Designer  ID blog. The brief asked me to create a course for seasonal retail employees working at a franchised Halloween store who had minimal training in effective customer service. The employees were from a variety of cultural backgrounds but were mostly between the ages of 18 and 30 and did not have extensive retail experience.

The parameters for the project were that it had to be: 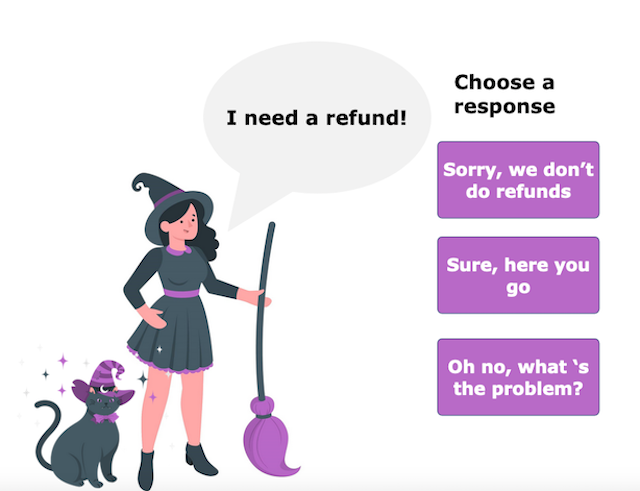 I developed a gamified course in Storyline 360 which provides learners responding to a common real-world scenario: handling a product return while following store policy. For a fresh take on the Halloween idea, I leaned into a ‘witchy’ theme using vector images from Freepik with a customized color scheme. While not included in this prototype, xAPI code could be embedded into the course and linked to a free LRS in order to circumvent the need for an LMS. 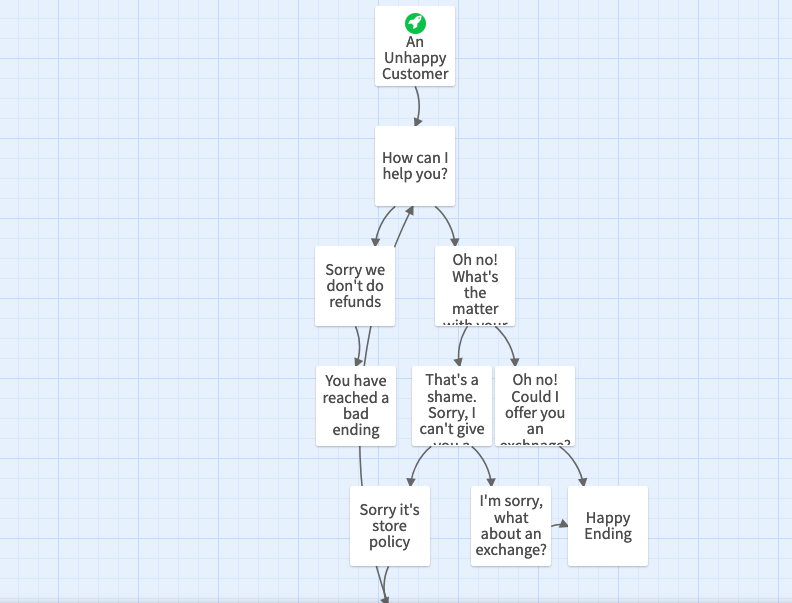 I knew immediately that I wanted to create a gamified branching scenario for this project. In order to create a learning experience which would be effective as well as enjoyable, I began by researching common challenges in customer service.  I began by creating a ‘decision’ path for the customer service interaction I was going to use for my branched interaction. Working with an SME, I identified the moves that a well-trained retail employee would make when handling a return: empathizing with the customer, avoiding saying ‘no’ directly, and identifying alternative solutions. This set of decisions became the ‘correct’ path. Then, we went over errors a poorly trained worker might make in the same situation: beginning the interaction by saying no, not empathizing with the customer, or breaking store policy to please them. These responses became the branches in the scenario interaction. After that, I used Twine to script my scenario and organize the passages.

Once I had my content laid out, I began developing my visuals. For a fresh take on the Halloween idea I used a ‘witchy’ theme which was more magical than spooky, incorporating an exasperated customer with a special request for her black cat. The soft purple and black color palette is otherworldly without being garish and the modified images from Freepik create a fresh, engaging aesthetic.

This was my first branched scenario project and I found it difficult to organize. Since the scenes are not linear the way that they would be in a typical Articulate project, I had to be more creative with my outlining techniques. I began by drafting an outline by hand using a large piece of paper and post-it notes to arrange the different scenes, and then used Twine in order to prototype the different pathways for the learner. I did multiple run-throughs of the project in Twine before building it out in Articulate. This careful outlining took up more time at the beginning of the process, but it made the process of authoring the final course in Articulate much faster. The facility I gained with Twine has also served me well when working with clients, since it allows me to quickly prototype branching scenario content and get feedback before I build anything out.

The prototype I developed is engaging while also being educational. The learner is empowered to make their own choices and they receive clear feedback in the form of story outcomes. Built-in chances to repair the situation allow players to learn from their mistakes without taking them out of the game playing experience.

While this was purely a portfolio piece, its emphasis on key performance indicators would make it easy to assess for a real client. I would evaluate this training by implementing customer satisfaction surveys at all stores using the training and compare satisfaction rates before and after the training rollout to gauge effectiveness. I would expect to see an increase in satisfaction and an uptick in positive Yelp reviews. Since this is designed for a franchise store, I could also use xAPI to track which store locations have the highest completion rates and cross-reference that data with customer satisfaction levels.